September 23, 2003: The First Step on the way to restoring Brookside Creek

The Lake Forest Park Stewardship Foundation conducted a major effort to restore Coho Salmon habitat to Brookside Creek, a tributary of McAleer Creek.   A dam constructed in the 1960’s to create a pond for a homeowner blocked fish passage on the upper reach of Brookside creek.  Launa and Rick Hoy, property owners, generously granted the Foundation access to  work on this dam, which is partially on their property. Coho salmon and cutthroat once spawned and reared here, and removal of fish barriers barriers was an important first step in reopening this habitat.    Click here for a map of the Brookside Creek drainage and for details of the barriers to fish passage existing when this project began.

Several work parties convened on the Hoy site during summer 2002 to prepare the site for the the breaching of the dam. The bulk of the “heavy lifting” occurred during the two-week period from September 8 through September 26, 2003. 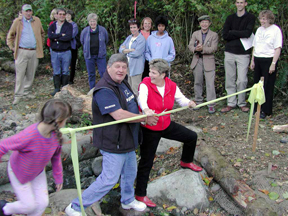 During this time Brian Bodenbach, the primary contractor for the project, temporarily rerouted the flow of Brookside Creek around the existing dam and created a new, fish-friendly stream channel through which Brookside Creek now freely flows. A ribbon-cutting ceremony on October 3, 2003, attended by many local officials and participants in the restoration, signaled the official completion of the first phase of this project. Over many succeeding months, volunteer work parties removed invasive plants and revegetated the area with native species.

Partnerships and Funding
A $49,000 Community Salmon Fund grant, awarded to the Foundation in 2002, funded initial steps in this restoration, informational meetings with citizens who live along the creek, and the salary of Eleanor Boba, the Foundation’s then Administrative Assistant. Project Directors Mamie Bolender and Jean Reid, and the Brookside Creek Committee, worked with Hart Crowser and Pentec Engineering Consulting firms, with local experts, and with the owners, to develop a plan which would accomplish the goals of providing good habitat while staying within the budget of the grant.    Permits and approvals were required from multiple agencies, including  the WA Dept. of Fish and Wildlife, the City of Lake Forest Park, the US Army Corps of Engineers, and the Washington Department of Ecology.

How you can help!